Of Lyricism and Symbolism, the artistic impulses of Marvin Chan are reflected through a series of reinterpreted portraits. 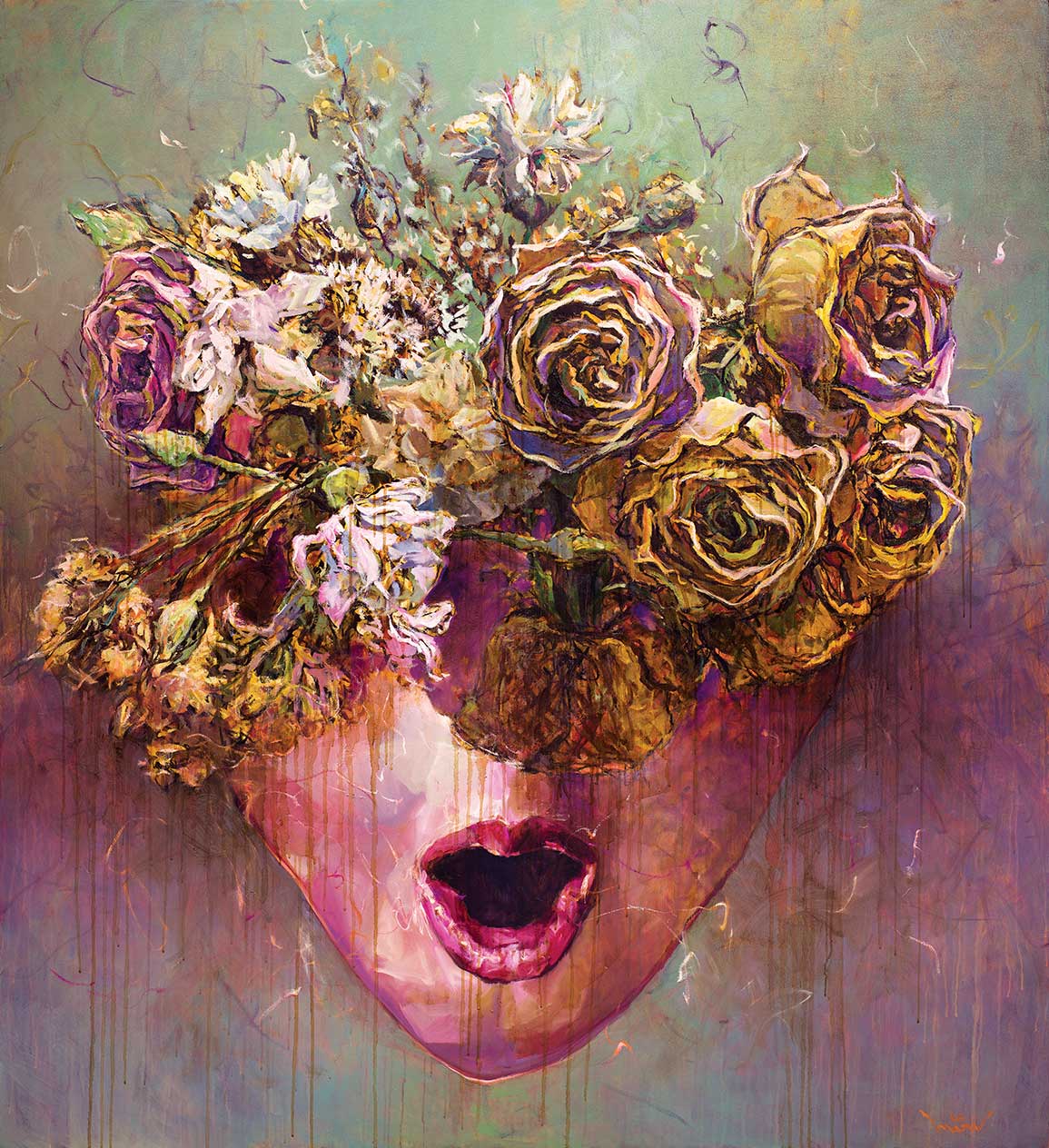 ‘Falling out of the skin into the soul’ encapsulates Marvin Chan implicitly, explicitly and paradoxically. Not the man, but the works. The artist, if an attempt was made at description, would fall unequivocally within Dante Alighieri’s prose, ‘In the middle of the journey of our life I came to myself within a dark wood where the straight way was lost.’

Marvin Chan is that strangely-beguiling alien Kanamit in The Twilight Zone’s 1962 episode To Serve Man; he fattens his ‘guests’ for the sole purpose of adding unsuspecting thrill-seekers to his already mouthwatering dinner menu. His latest show to date, Harum Busuk (Fragrant Foul) was held at his private atelier, The Open Studio in November last year. Well into his fifth solo, Marvin presented six new works, paralleling his country’s socio-political turmoil, the absurd leitmotifs of the rational and irrational, the mounting struggle between priorities, the risky and risqué. The country in his paintings is wounded and severely scarred, and she camouflages these hurts with rose petals as band aids. It is all a smokescreen, but oh how the scent seduces. That is until they lose potency and the stink boldly hurls out smelling worse than anything imaginable and unimaginable. 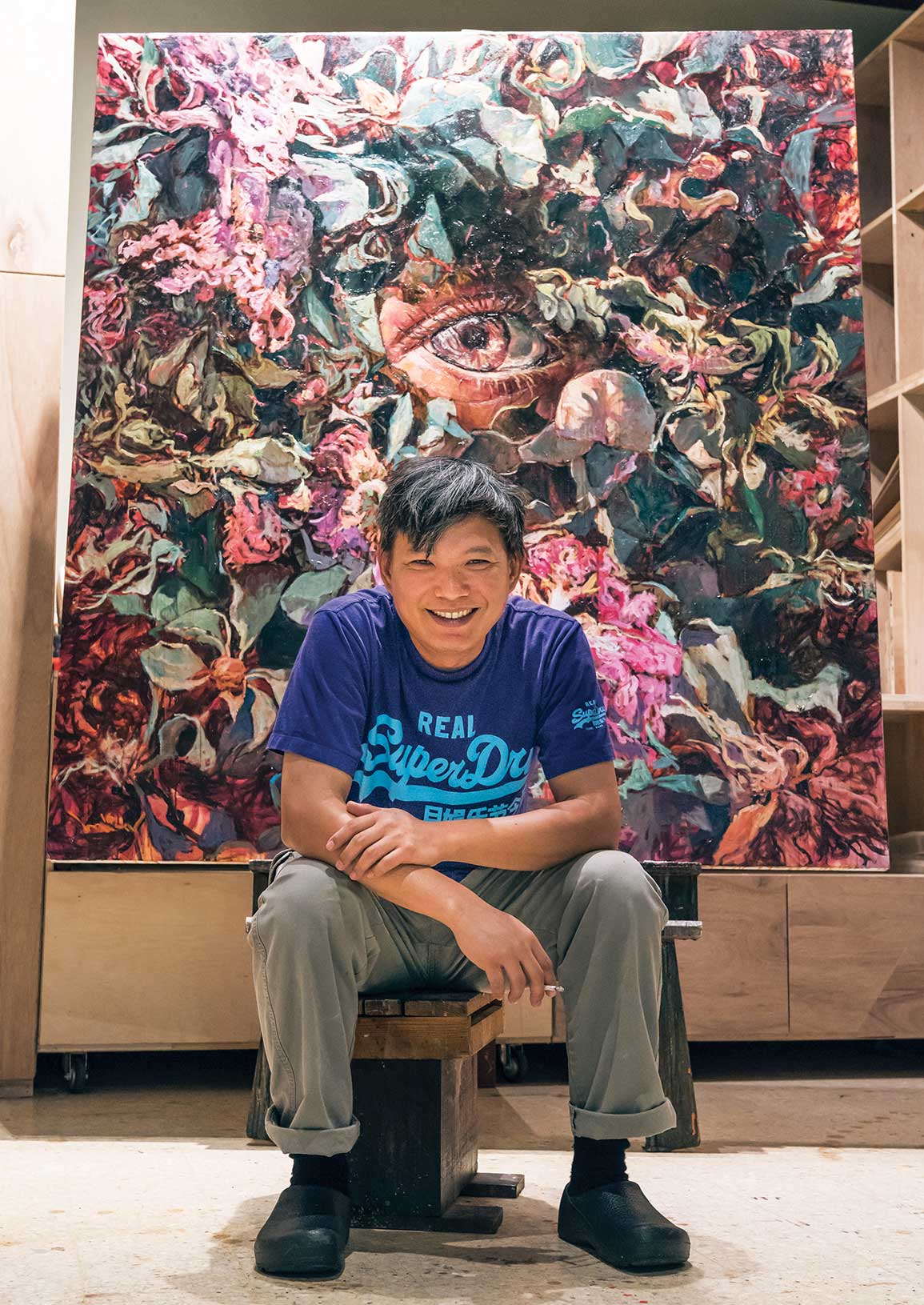 The artist’s raison d’etre lies in his almost obsessive predilection to issues of corruption, distribution of class, isolation, and almost always aimed at political encumbrances. His paintings are simultaneously discreet and rebellious, and although politically aggressive, he relays his messages ever so sensitively.

Case in point: his show at Singapore’s Chan Hempe Gallery in August last year. Curated by maven-extraordinaire Shireen Naziree, she reflects on Invisible Lives: Tempting Frailty, “When politics impact communities, there are often attempts to relive dreams and desires to transform reality. Through Invisible Lives: Tempting Frailty, Marvin has produced a serious body of work in an effort to piece together and point to the darker underbelly of our times. When viewing Marvin’s paintings, one views a struggle: personal, intimate and caring as the layered surfaces bear traces either of emotional strength or ambivalence. While the detailed surfaces of his paintings provide a particular luxury, his figures and symbols in reality are externalising deeper themes of desire, containment of emotions and melancholy as they speak between the lines and purposefully so; for in Marvin’s world, melancholy and exuberance exist in equal measures”. 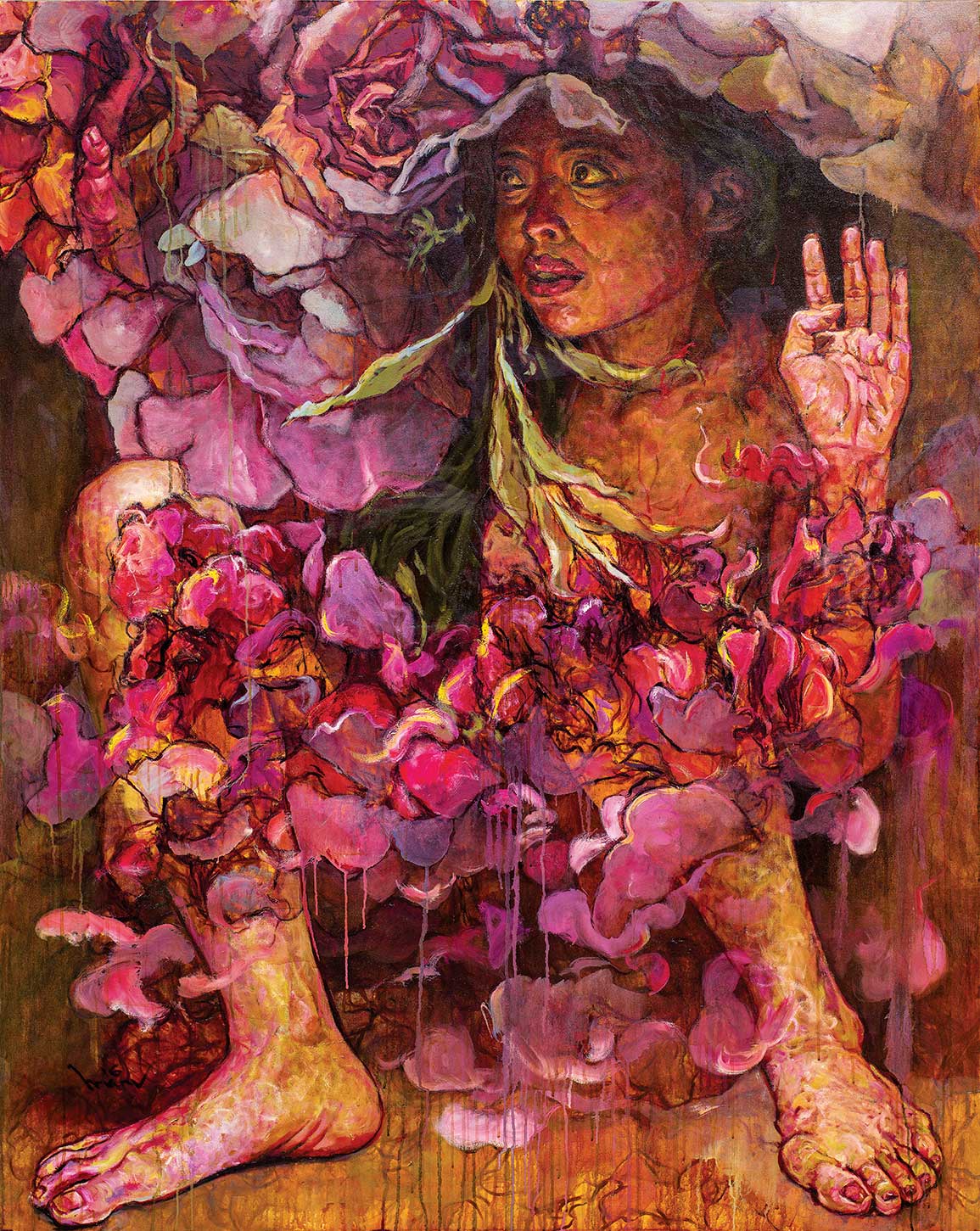 How beautifully described, and heartbreakingly true, and even when he ‘speaks’ of cultural divide and isolation, dispersal of class and power, we feel demolished and oddly safe at the same time. It is that heavily-veiled messages of hope hidden precariously in the canvases; you either see it, (after getting a semi-permanent neck ache in the process) or it flies by quicker that an eagle ensnaring an unwary fish.

When asked what is the first thing he sees before brush touches canvas, and when it does, what is first painted, the artist quietly says, “I think I rehearse the emotions, then scrutinise the colours needed. I spend a considerable amount of time looking at everything, to find my way in. It is usually the eye which emerges first, the tracing of contortions, and I’d go on from there”.

A dialogue with Marvin is like being cornered by the Mad Hatter at one of his endless tea parties; in a place where Time metes out delicious penance, repeating itself like a cracked loop; the Porsche-driving-Hatter kitted out in garb from Homeless r Us, and Alice is stripped. There is always tea, plum wine sometimes, and music from the whirring fan and camera clicks, the senses in a perpetual euphoric state from scents of paint, oil, wood, earth, tobacco, metal, varnish.

The artist is astonishingly self-aware, yet as you begin to know him, (as much or as little as he permits, that is) he remains the impossible outsider, the one who makes the box and then disassembles it simply because ‘it was time’. We are, after all, embattled, and we see Marvin wearing his battle scars with love, with pride, with hurt.

It does take a while to fully absorb his manifestations; it is a emotionally powerful theatre drenched in authentic vulnerability, both fervently and bodily. He is saying that in time, if we continue to shut our ‘yaps’ and do nothing, all will disappear and terrifyingly so, all will be erased from memory. 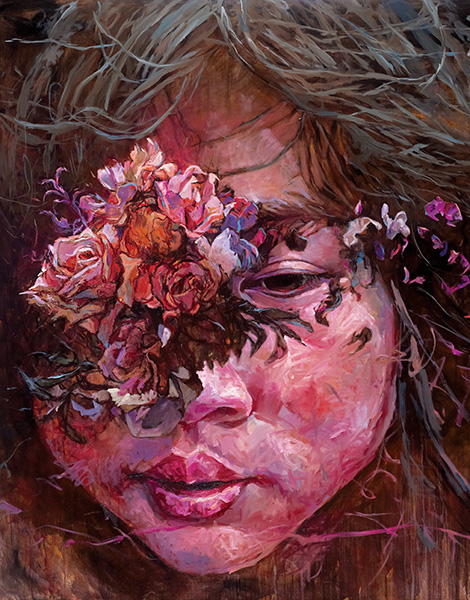 In his latest works, which he began in 2014, the artist ruminates (his rolled cigarettes a constant mistress), “I call it Desecration of the Temple; Folly of Man. The process is slow, and painstaking. I complete one or two pieces a year. There are four now. In our ‘search’ for God, we injure ourselves grievously. How do we look? Where do we even begin such a search? And would we recognise it if it was found?”

Looking closely at his subjects, one begins to understand the complex relationship between painter and muse. It is one debauched, as it must be if anything was to come to awareness. It is copulation, rough, depraved mad sex, a reaping of flesh, bone, heart, lungs, gray matter, veins, sweetbreads, a marriage forged within dark waters. It is Rapture. The muse becomes the Sacred Whore, made to contort, gyrate, grimace, laugh, cry, dance, writhe, violated in ways unimaginable but she is never touched, for that would be sacrilegious; there would be carnage. The painter is her Master, her God. He feasts, swallows her whole, spits her out, tosses her ravaged corpse to a cluttered corner. And as the skies bruise in lovely baroque hues, she is atrophied, body slathered in sweat, hair dishevelled kinky Medusa-like, face carmine-flushed, bleeding from furious cuts courtesy of that splintered wooden box she entered and attempts to escape from, and she resigns to being entombed.

Her body is no longer a temple. Decimated and in ruins, she stares at a blank sky praying for an end to a God who no longer listens. 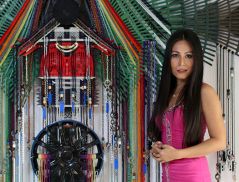 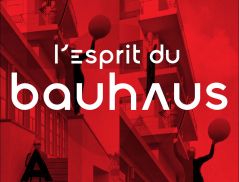 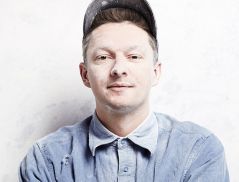