Set against the background of a densely populated Wan Chai, the story of a newly revamped Happy Valley Residence by architects, Lim + Lu unfolds. 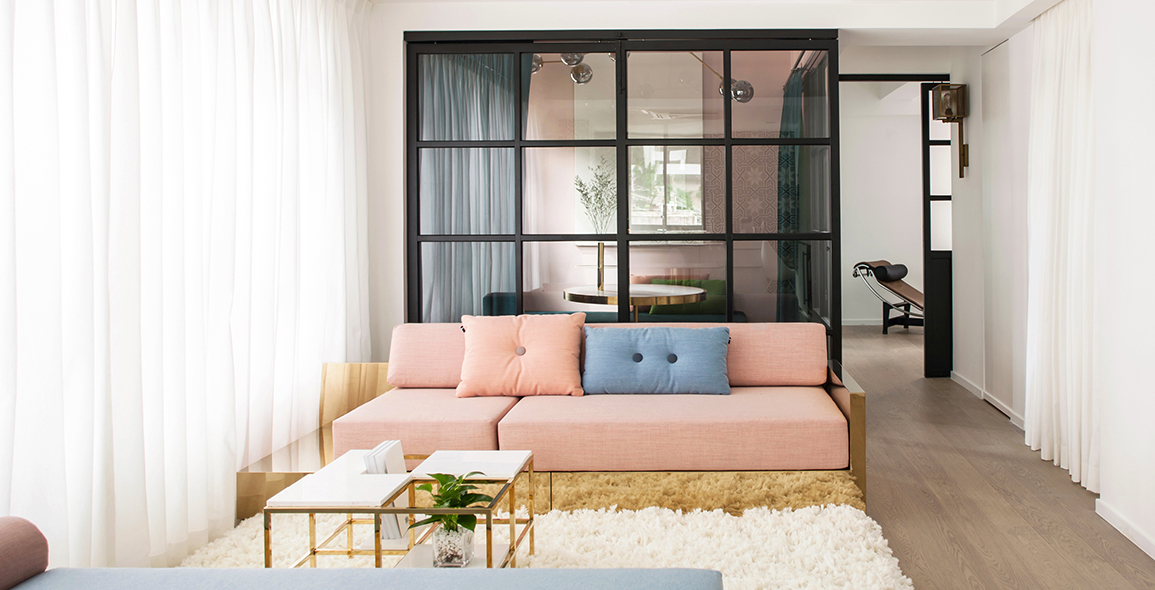 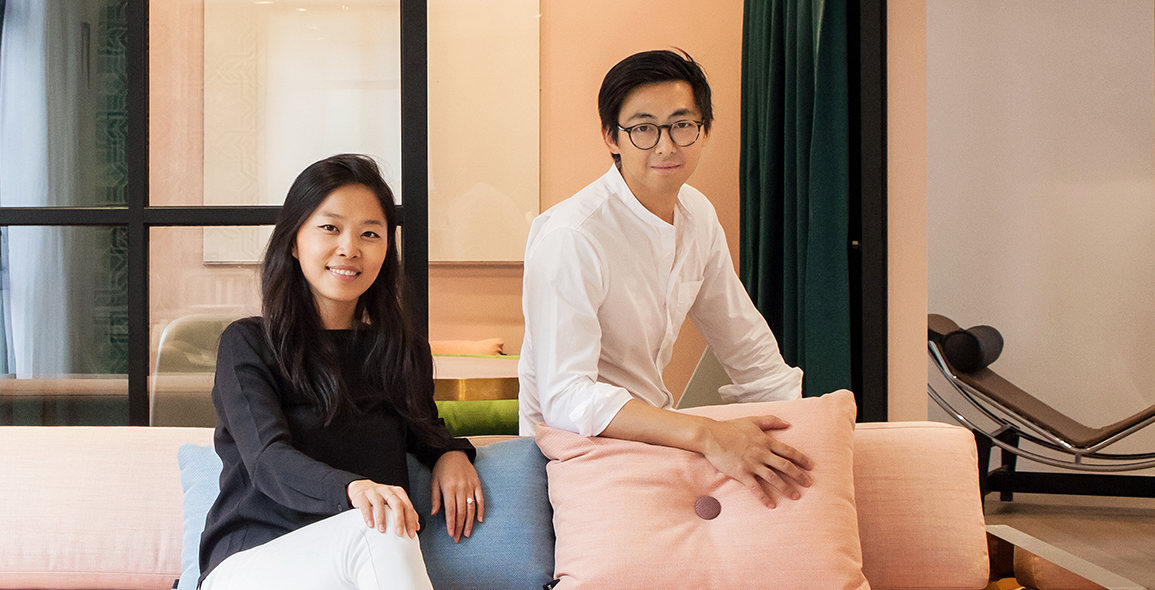 Densely populated, Wan Chai is one of the first areas developed in Hong Kong. With time, it is inevitable that many of the buildings would face a natural decay. Major gentrification efforts have been taking place in recent years and today, this area has seen a new light with an upper income residential profile that includes a mix of locals and expatriates.

Set against this background is the story of a newly revamped apartment by Architects, Lim + Lu. This apartment in Wan Chai doubles as their showroom. The young New York-born multidisciplinary design practice is keen to showcase the 1,200 square feet space that neighbours Happy Valley Racecourse as a reflection of their versatile and colourful design aesthetic. 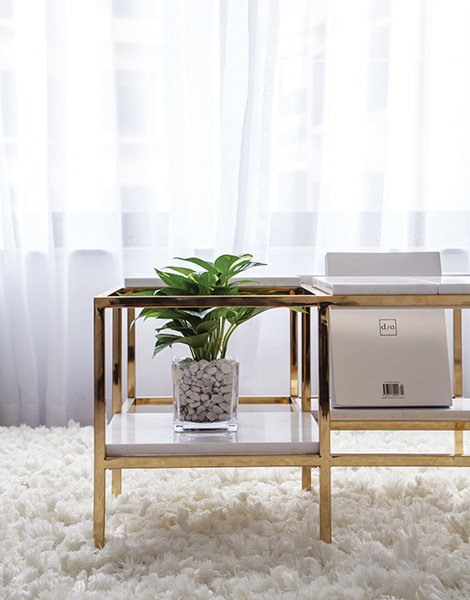 Originally, the interior of the apartment has all the characteristics of a typical Hong Kong dwelling place – a long and narrow corridor that is void of light. This corridor services three bedrooms and distinctly demarcates spaces for the kitchen and living room. Almost everything has a tired and muted colour tone.

In efforts to revamp this traditional apartment, Lim + Lu decides to challenge the typology of the conventional apartment and the norm of labelling rooms. They are determined to keep the aesthetics of the place clean, fresh and sophisticated. Their first step is to consider how the modern-day individual uses the home. They understand that modern homeowners now have a need to be adaptable in multiple situations.

Translating this concept into what they want to create with the apartment, the designers come up with the idea to free up the space in the apartment and still maintain the option for privacy. The walls of the corridor now give way to a set of suspended glass, black powder coated stainless steel sliding doors. This immediately creates a flexible and adaptive living environment that better reflects the transient lifestyle of today’s city dwellers.

What was once the living room and bedroom now gives way to a unified, core living space that has continuous warm oak flooring. This helps to blur the boundary between the public and private spaces in this home. The walls of these spaces are painted white with black accents, signalling spaces of rest and relaxation.

An easy way out to maintain this apartment’s spatial continuity may have been to fall back on what is now the ubiquitous New York industrial style. Lim + Lu, however, choose to avoid this and deliberately pick hues that will inject fresh life into the space. The shape-shifting bedroom adjacent to the main living area now is adorned with a striking jade green drapery that allows it to be an extension to the living room space or enclosed as a guest bedroom. Colourful geometrical patterned tiles spruce up the space while pops of green, pink and turquoise appear vital in bringing out the cheerful essence of this space. 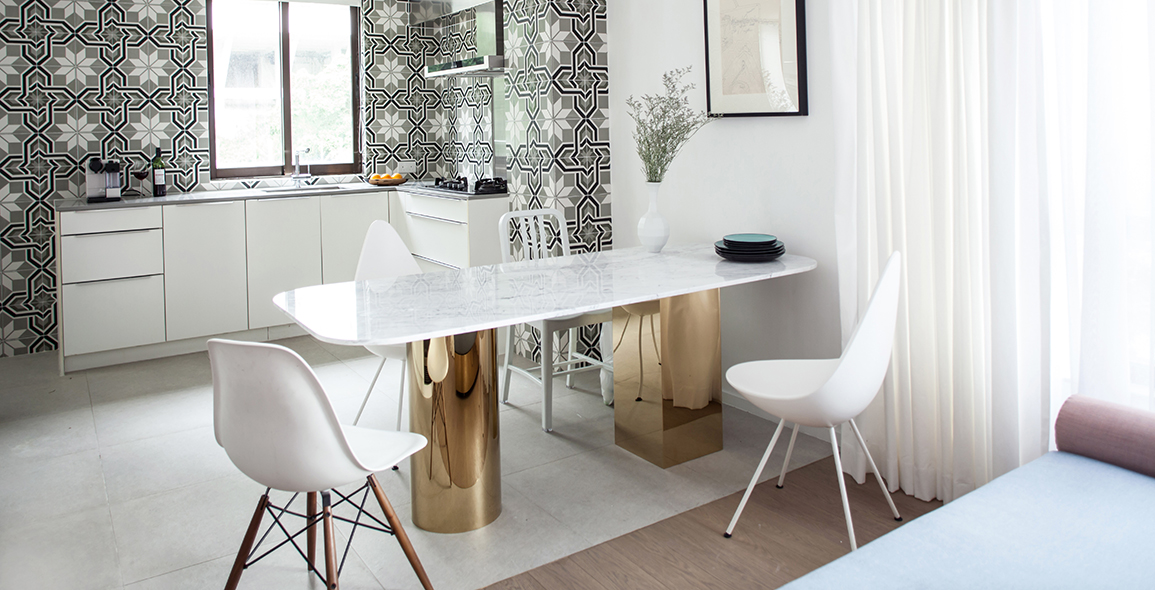 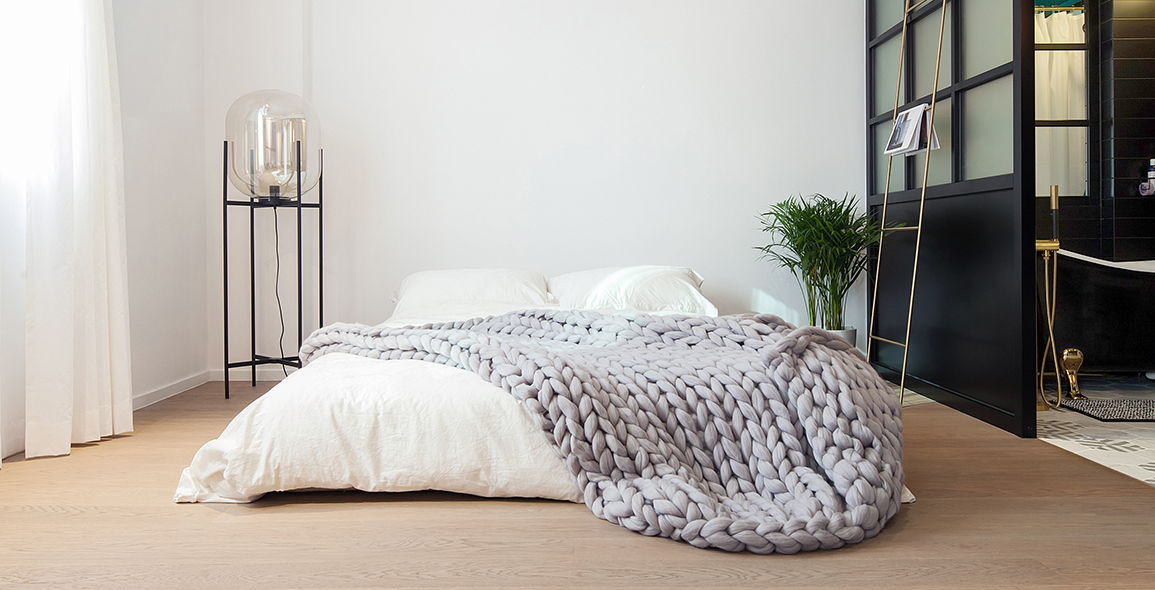 The thresholds created by the subtle distinctions of colour, texture and material maintain a fluidity to allow the space to still blend effortlessly together as one and complement furniture pieces, which feature prominently throughout the space.

A handcrafted Lunar Mirror with two half swing doors that are fully collapsible on both sides, resembles the various phases of the moon. Lined in brass, the combination of black marble and vivid teal creates a resplendent feature in the vanity area. Despite spatial limitation, the space is completed with double washbasins and a pair of chic pendant lights.

The pastel upholstery that rests on seemingly dense brass blocks of a sofa, day bed and a pull out bed is a reflection of this colourful apartment, which juxtaposes and grounds the lightness of the space. In fact, the geometric daybed features a brass-finished base with a blue seat of the same height resting on top. A pink cylindrical pillow seductively carves into the seating block.

A Frame table acts as a scaffold that allows different components such as marble and wood panels, valet trays and magazine racks to latch onto it for a customised piece. The entire ideation complements the flexible and ever-changing way of today’s living and is designed with the user in mind.

The tagline Lim + Lu uses to promote such a piece is ‘Designed by us, personalised by you.’ 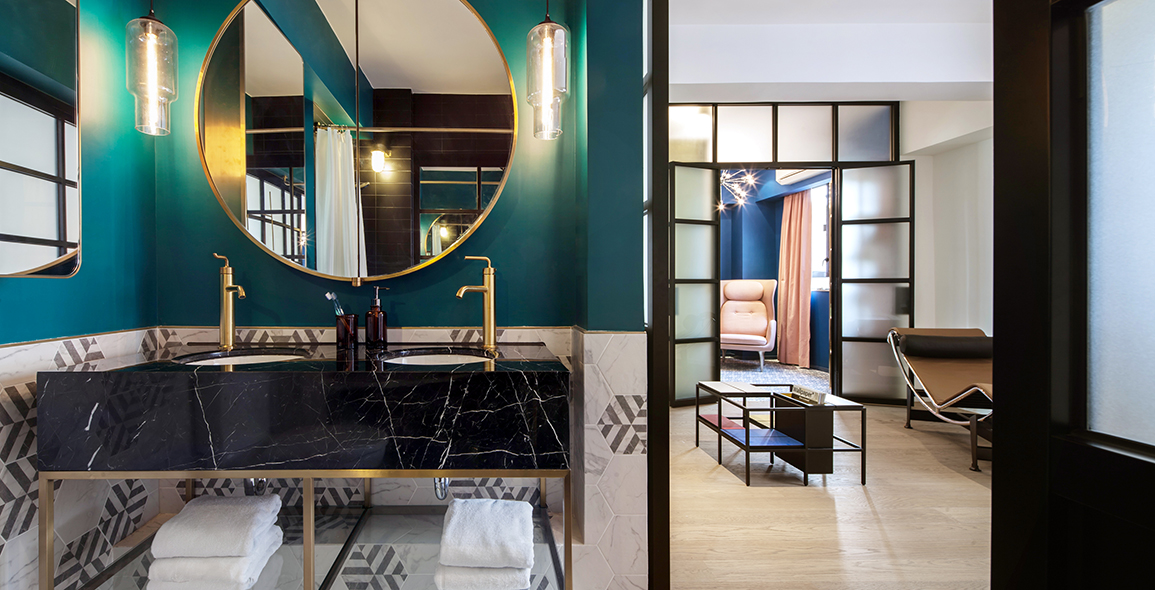