House off Cluny by RT+Q

RT+Q’s House Off Cluny is both inward and outward looking, providing its occupants with a layered backdrop for engagement with nature and with one another. 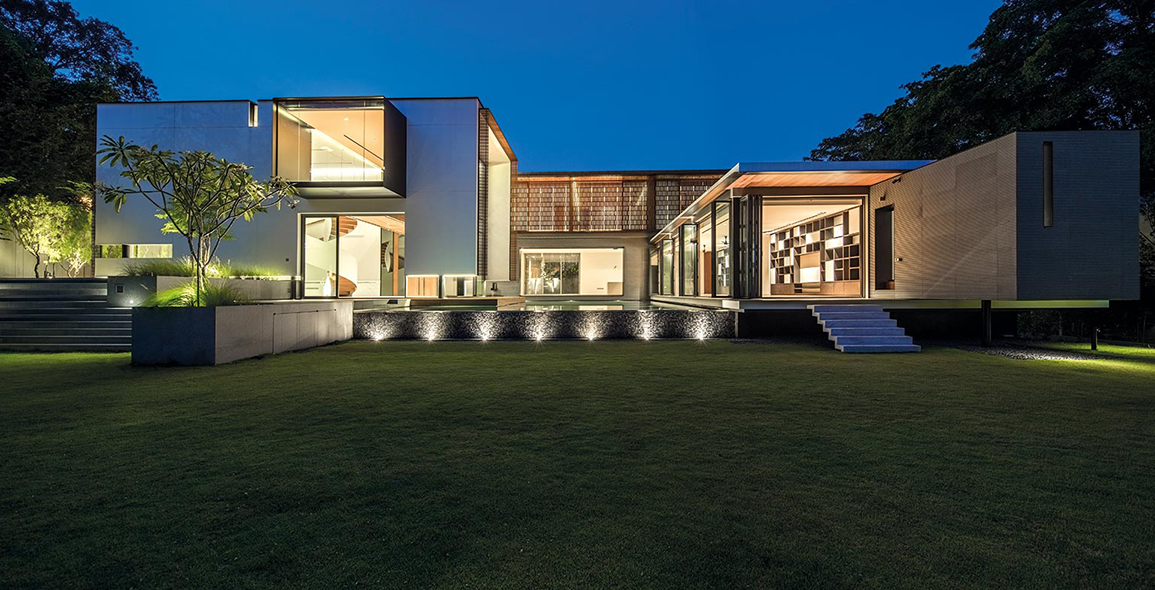 RT+Q Architects, helmed by Rene Tan and T K  Quek, is one of the few firms in Singapore whose design language is consistently recognisable. Influenced by the Modernists, clear forms and a luxurious yet minimal material palette give rise to elegant architecture and experiences.

One of its recently completed projects is the House Off Cluny, a lush residential enclave near the Singapore Botanic Gardens. Built for a family with two children, the house is situated on an irregular pentagonal site with a very narrow road frontage and wide rear. Taking advantage of the unusual site, the architect positioned the house nearer the road and opened it inward toward the rear to the view of expansive green.

‘The client specifically asked for a large garden, which is highly unusual in Singapore where the brief is usually to maximise built-up area,’ explains Koh Sock Mui, the project architect, on the luxury of having the large rear garden. But it is not just the view to the garden that is impressive. This garden also provides a good vantage point to view the architecture of the house – a dynamic kit of interlocking blocks and façade cut outs.

The main parti is simple – a partial courtyard scheme with living spaces surrounding a swimming pool ‘which serves as both a water feature as well as a focus of family activities,’ describes Koh. The public and private zones of the house are well segregated by the different volumes housing three key wings: two living quarters that form a ‘C’ shape in the section, with one floating above the swimming pool (containing the master bedroom and two other bedrooms) and the other resting on a long, granite-clad wall that runs from the front of the house to the rear of the site; the living room that is housed in the third wing. ‘The living room, meant for entertaining, is in a separate floating inverted U-shaped block, visually and spatially linked at the second storey by a glass bridge,’ describes Koh.

The living room, located by the entry foyer, is designed to receive – and impress – guests, as Koh reveals. ‘There is a compression of space as one enters from the road and descends to the entrance foyer under a glass bridge (a transition space from the upstairs private zone to the living room). The space expands into the living room – a soaring double-height space that is further accentuated by the change in materials from grey stone and timber to a pure white marbled space,’ she adds. In addition, a swirling spiral staircase, leading up to the second storey private zones, holds the anchor at the end of this space. The eye is then led beyond the staircase to the view of the glistening swimming pool in the heart of the house. 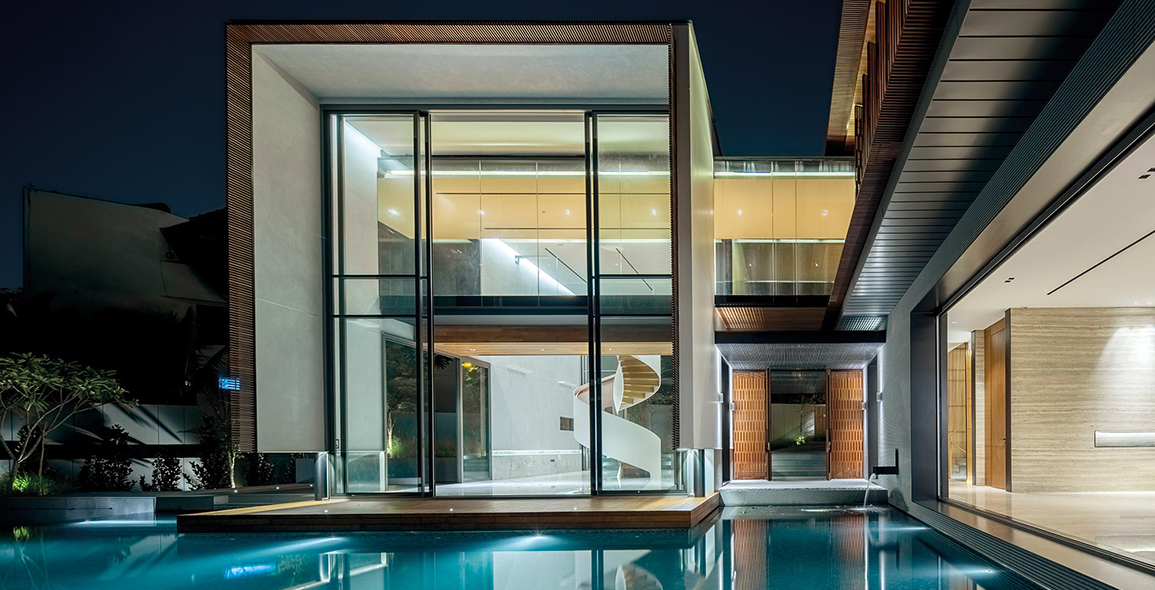 Two long walls visually and programmatically define the space in the house, Koh highlights. The first aforementioned granite-clad wall serves as a backdrop for the swimming pool while separating the semi-private zone (containing the dining room and kitchen) from the private family room and other bedrooms on the first storey. The other wall, expressed as a long row of bookshelves, intersects this first wall perpendicularly, and separates the family room from the first-storey bedrooms behind. It terminates with the pool shower room, housed in a hovering rectangular shell over the grass.

This latter effect of lightness is a subtle leitmotif throughout the house that balances out its strong, rectilinear forms. Another gesture that helps create a similar effect, for instance, are angular cut-outs at the edge of some of the facades, as well as the lifting of the wall edges from the ground where the living room faces the swimming pool. Specially placed lighting at the underside of the walls helps to accentuate this last detail, Koh points out. 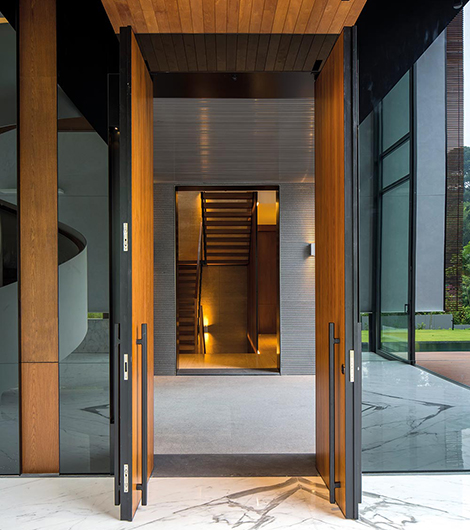 Another prominent leitmotif is the use of timber throughout. From the front of the house, the façade of the master bedroom block is timber clad, lending a feeling of warmth to the adjacent whitewashed living room block; timber screens detailed like fins peek out under the perimeters of this block’s structure to further express the U-shape of its elevation. Teak for the interior flooring and rubber wood (a laminated timber stained to match the interior teak) continue the natural palette, while a curtain of Chengal operable timber screens fronts the second-storey master bedroom block as privacy and sun-shading devices.

Overall, the house is at one with nature. Apart from the large rear garden, the architect has also inserted an intimate ‘pocket zen garden’ outside the living room. ‘This garden is stepped as the land slopes from the road level to the living room by a metre. It is designed as a spillover space for the living room where party guests can adjourn for a quieter conversation or simply sit on the steps and observe the party. We have frequently observed birds in the garden, which we hope means we have succeeded in creating a harmonious environment for living through the architecture and landscaping,’ says Koh. The roof above the family room block is a blanket of turf, providing a picturesque montage of layered green for the occupants on the second storey, and furthering this man-nature relationship.

Aside from the greenery, the house is well designed for plenty of communication. The interlocking spaces create abundant interesting, internal sightlines, which are useful in connecting family members to one another. In designing a home, this is perhaps the most important ingredient of all, and the House Off Cluny manages to capture that.