UNTITLED #7 is a partial renovation of an original two-storey apartment at The Arris in Tanjong Pagar that identifies elements found within its site context. 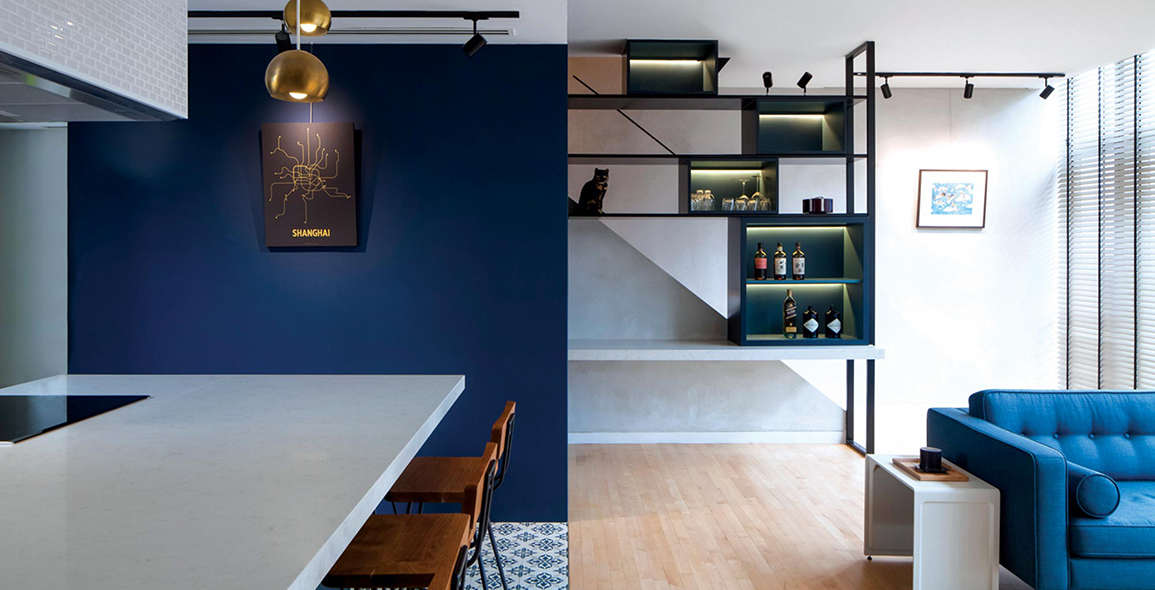 Studio Wills + Architects has skilfully inserted two spatial boxes within a duplex apartment unit in downtown Singapore. These boxes mediate the various constraints of the project, turning them into opportunities instead.

A compact nine-storey condominium, The Arris is favourably situated in the city centre on Yan Kit Road, in the culturally rich district of Tanjong Pagar. The development, however, sits on a narrow and wedge-shaped site that straddles between two immediate urban conditions: it borders a towering Pinnacle@Duxton on the west and the road on the east, where unhindered views of a low dense and old school HDB estate pan out on higher levels. In response to this context, the building adopts a largely opaque façade with small window openings on west facing; and in contrast, a simple glazed curtain wall defines the east facing façade, embracing the urban view of the HDB flats. At this point, the divide is clear. An invisible line has been drawn, separating the favourable and not-so-favourable side where views are concerned. 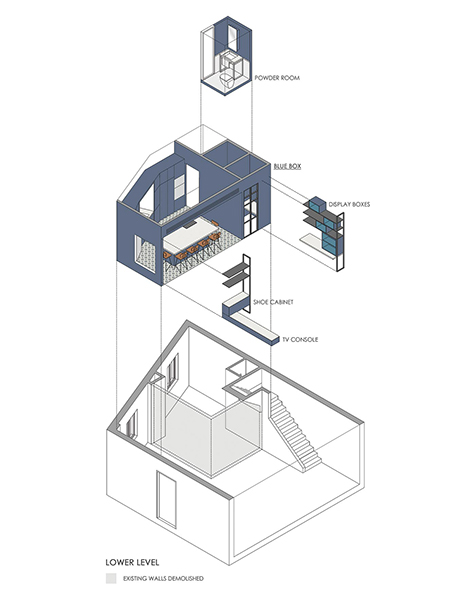 From exterior to interior, the building dons a minimalist aesthetic, with a subdued colour palette of predominantly whites and greys. For the renovation of their apartment that occupies the top floors of the building, the owners have requested for a scheme that will depart from the original aesthetics in which they termed ‘a default’. With this in mind and coupled with a tight budget, the designers cleverly adopt the strategy of a partial renovation: the new design and requirements of the owners will be packaged into two boxes, keeping the rest of the apartment untouched in its original layout or fit-out. These boxes organise functions and create atmosphere that contrasts the existing. The ‘old’ and the ‘new’ are defined and separated.

Entering the first storey of the duplex from the building’s white and grey corridor, one senses the immediate divide that has been set up within the interior space. The morning sun filters through motorised blinds of a bright and spacious living room where an original fit-out of light timber flooring and modest walls hints of the ‘old’. Interventions within this space have been kept to a minimum. 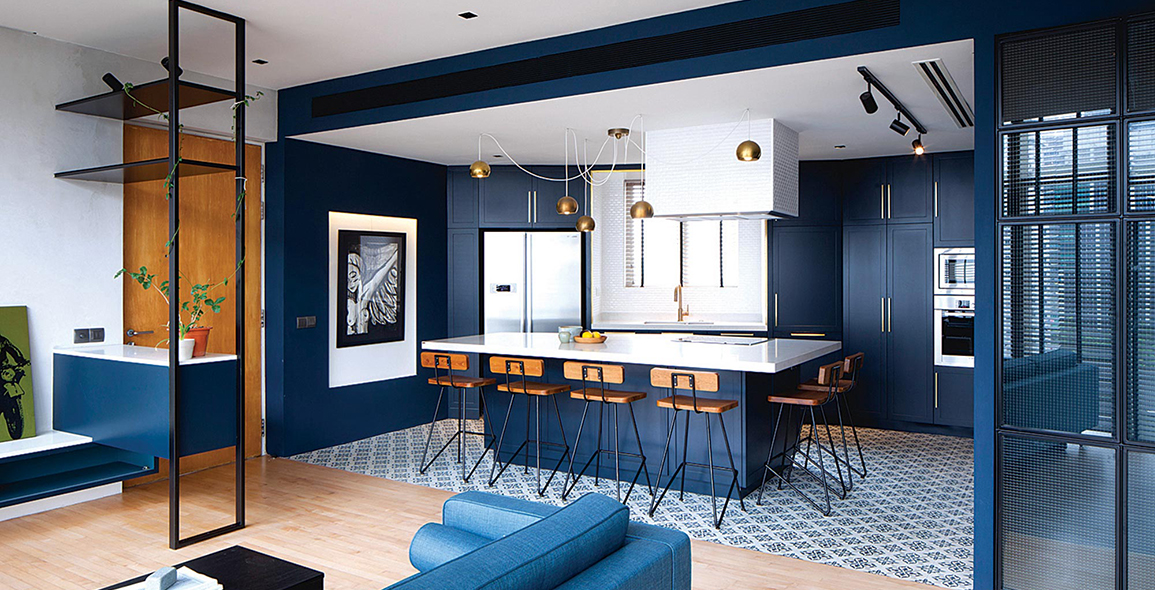 In stark contrast, the dining room and open kitchen are reconfigured into one large space, organised within a strikingly blue box that defines the ‘new’ half of the first storey. Blue was a natural choice of colour being the owners’ favourite, apparent in many of the reference images that were collated for the project. Walls within this box are painted a deep blue that carries through to a row of kitchen cabinetry along the slanted façade of the apartment, defining the kitchen-dining space. Framed within this blue ensemble is a white niche lined with small pieces of subway tiles, housing a small window and the kitchen sink.

Next to the kitchen-dining space is a services yard and powder room, expressed as part of the blue box. At the request of the owners, a small left-over space tucked under the stairs was converted into a cosy working space that can function autonomously when required. A pivot door in black metal frame and wired glass demarcate the boundary of this small private working space, and also that of the blue box. 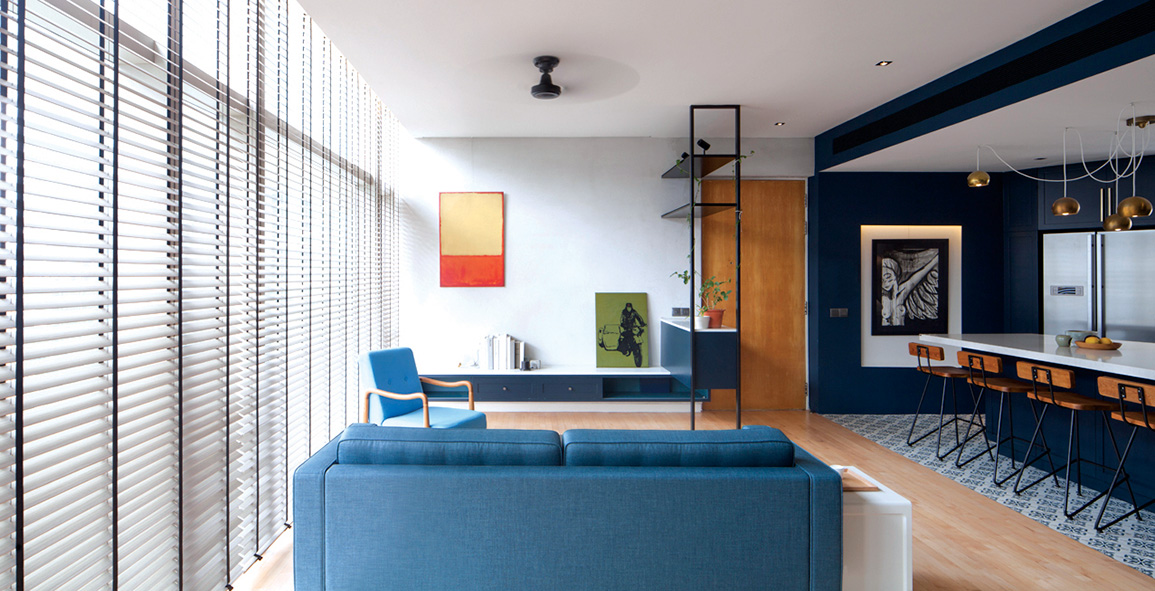 Outside the box, blue elements spill out to the living room in the form of opens shelves and a TV console. The details of these elements are more pronounced and their junctions expressed, as opposed to the simple hidden joinery of the kitchen cabinetry. Open shelves are supported on black steel frames that are detached from both the walls and floor, in a deliberate gesture to separate the new from the old.

The second storey features a smaller black box that occupies half the master bedroom, reorganising the space within. Black, being the owners’ other preferred colour, would make a strong contrast against the original white walls. A walk-in wardrobe and master bathroom were introduced incorporating many of the materials that were used within the blue box. Metal frames with wired glass are used extensively as dividers, professing the owners’ love for the industrial palette. Outside the black box, the wardrobe doubles up as a bedhead orienting the master bed towards the invigorating urban view. 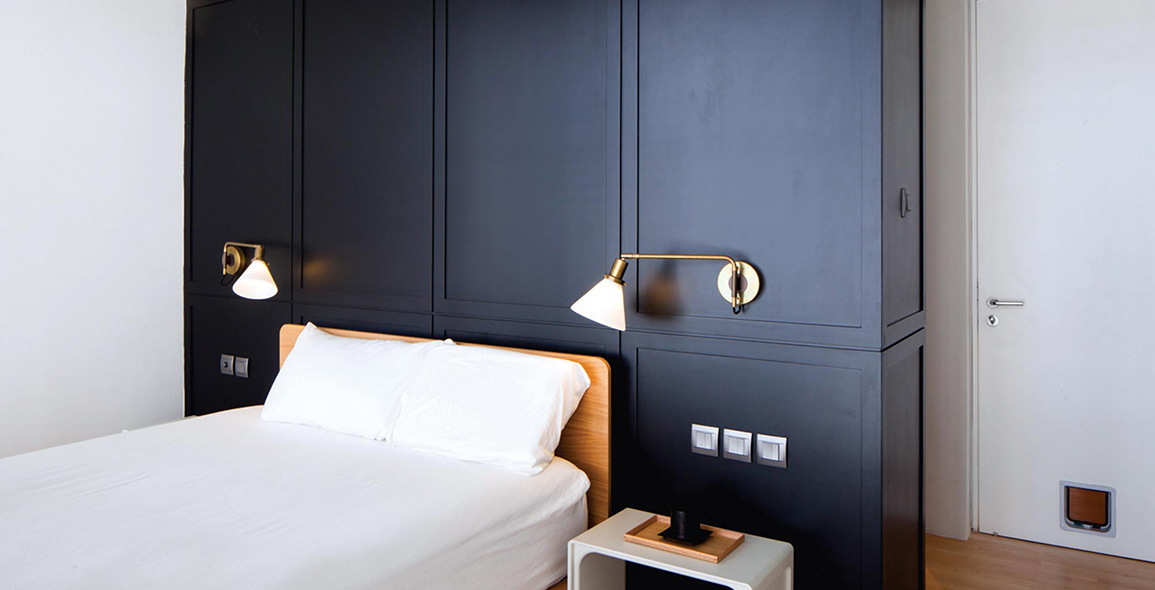 A Complete Interior with Two Boxes

Through the strategy of partial renovation, the designers have created, as they put it, ‘micro-environments’ within the apartment unit. The division between old and new is demarcated with the insertion of two boxes, with a bold and consistent use of colour, creating dramatic contrasts and atmospheres.

Yet, the two boxes set up an order within the apartment unit that anchors the design as a whole, organises space and binds the two levels into a complete interior. Within this framework, the owners brought in light fixtures of an industrial theme that appear as task lighting throughout the apartment and feature prominently above the central island of the kitchen-dining space. Exquisite brass fittings were sourced from America for the kitchen cabinets. Various paintings, each with their own fascinating little stories are hung in place on backdrops of deep blue or white. These urban accessories invite the surrounding environment into their apartment, and embellish what once was a dull and uninspiring interior space.

With these two boxes, the designers solved the three complexities of the project in one single act: the lack of views at the west-facing facade of the apartment are compensated for; by concentrating resources and effort in destined areas, a complete and impressive interior is realized within the tight budget; and perhaps most importantly, the interventions have successfully introduced a new identity and lifestyle into the traditional duplex layout, well suited to the needs of the owners. 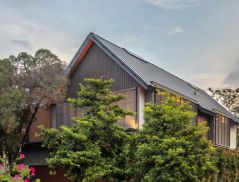 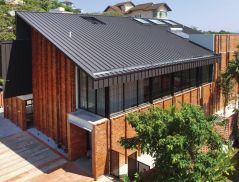 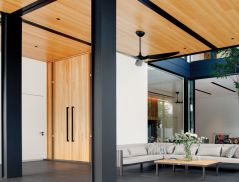