It is a project rich in texture, symbology and community spirit 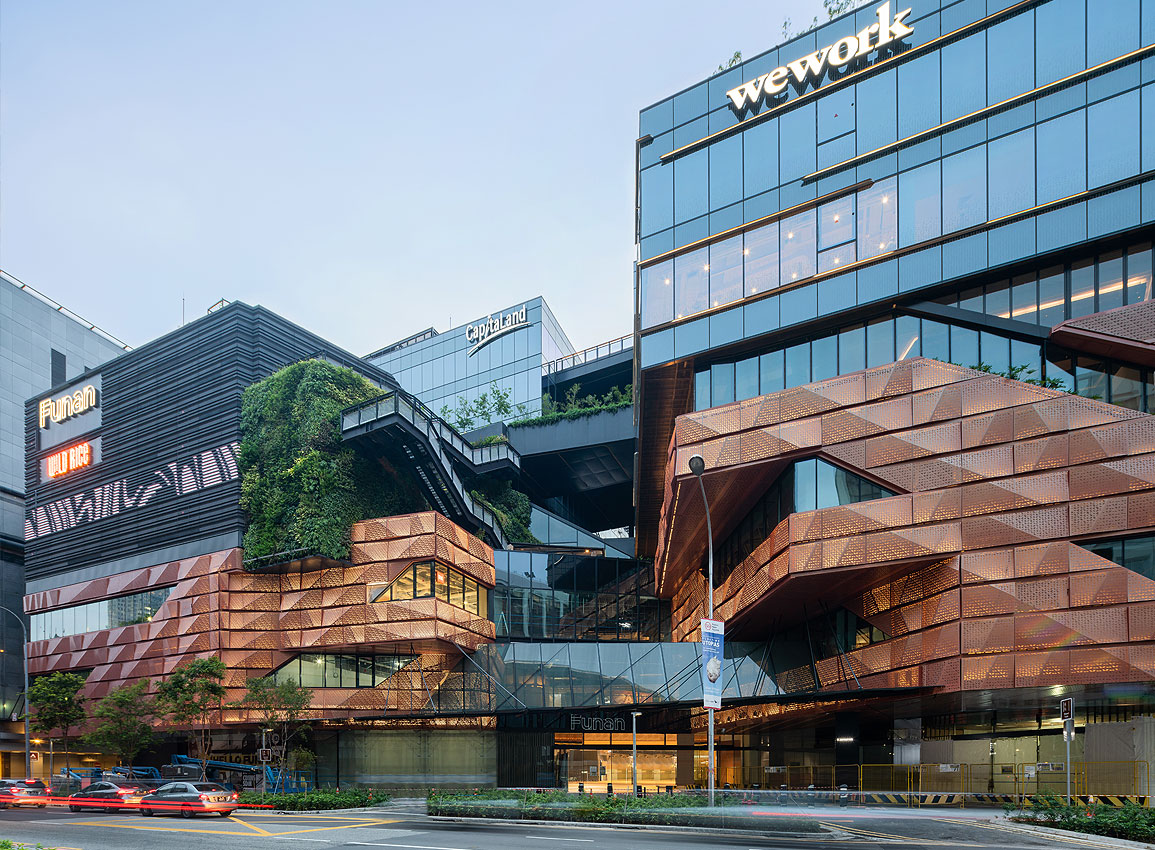 After 27 months of construction, Funan has reopened. In place of its previous incarnate as a mall with a strong tech focus is a mixed-use lifestyle destination with retail, office and residential components.

Woods Bagot was commissioned by CapitaLand to take on the masterplan, architecture and interior design of the project.

Sensitive to the communities that had sprung up from its previous iteration, the team held collaborative design charrettes with key stakeholders, including current and future tenants, potential shoppers and investors.

“We were interested to explore how Funan could connect to people’s lives; to break down the scale of this large project into something granular and integrated into the community,” says Stephen Jones, a Director at Woods Bagot and the lead architect on the project, referencing the firm’s user-centric approach to all its projects.

The outcome was the discovery that people are “really passionate about their hobbies”, and different community groups should be represented in the final design of the development to be able to engage with them.

At the same time, the solution had to include a public space that complements the retail typology, while being accessible and transparent at the same time – similar to the idea of a marketplace or town square.

These concepts crystallised into what is known as the 25m-tall Tree of Life, “growing” in the centre of the linear atrium of Funan that runs from basement two right up to the roof, and links North Bridge Road and Hill Street.

Dubbed by Jones as “an iconic totem”, it seemingly reaches upwards and branches out into 20 platforms, studios and mini forum spaces that allow different community groups to inhabit. Everything from a photo workshop, to cooking lesson or children’s art class can be held.

Since the material palette is industrial chic, the tree is made from a mix of dark steel, glass, mesh balustrades, bronze and concrete finishes. Up to 250 tonnes of steel, or the equivalent of three mature Rain Trees, was used to construct it.

Basking in its shade is an event area on level one, paired with a staircase lined with artificial turf and LED text running on the side of the step.

The symbolism of a tree is quite deliberate, it turns out. “A strong identity around the theme of growth was developed. For me, growth is very much a part of this idea about learning and creativity,” shares Jones.

“To create a vertical element as a notion of a tree at the heart of a concept that I was interested in developing, ties creativity with growth. The building itself and its design of the spaces then have a sort of organic flow to them, so you see this step in its complexity.”

This narrative continues onto the façade of the retail podium of Funan, which Jones terms “the roots of creativity”. Entirely wrapping levels two to four are tessellated panels designed using a parametric system.

Punctuated into them is a pixelated, geometric pattern abstracted from the cellular structure of soft woods in tropical forests. The pattern is repeated on the curtain wall of the office floors, interior panels within the building and even on graphics for the branding of the project.

The coppery colour of the tessellated panels was chosen for their resemblance to the earthy tones of tree roots or resins, achieved using a reflective dichroic coating, which changes colour based on the light and angle it is viewed.