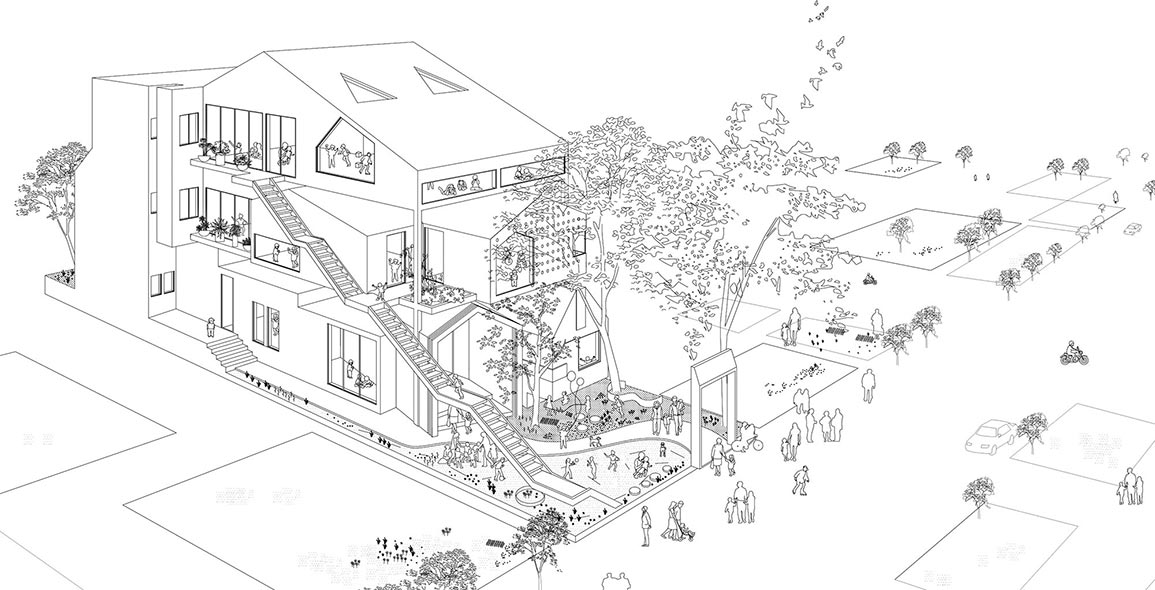 Sometimes, architecture serves as sculptural objects for its immediate urban environment. In Chiayi city in the east coast of Taiwan, Cinderella’s glass shoe is scaled up into a glass church for wedding ceremonies. In an attempt by MAD Architects to reintroduce natural elements into a highly urbanised site in Nanjing, a series of curvilinear vertical fins and mullions abstracted from the painterly shape of Chinese mountains wrap around the entire 60 hectares of development.  In the Netherlands, the small town of Schijndel, home to traditional Dutch agriculture commissioned Dutch architects MVRDV to build a communal building in the new market square. The solution proposed and built rematerialized a typical brick barn of the region entirely in glass, reinstating the cultural and agricultural identity of Schijndel within the new heart of the old town.

Amongst all forms of fiction, the archetype of a ‘house’ is perhaps the most commonly proposed and manipulated form in recent architecture. From Kengo Kuma’s Asakusa Tourist Centre in Tokyo to Herzog and de Meuron’s Vitrahaus in Germany, the ‘house’ form is a recognized icon. In Vietnam, Kientruc O architects envisioned their own version of the fictional house: several houses are inserted into an old and monotonous townhouse converting it into a private kindergarten. 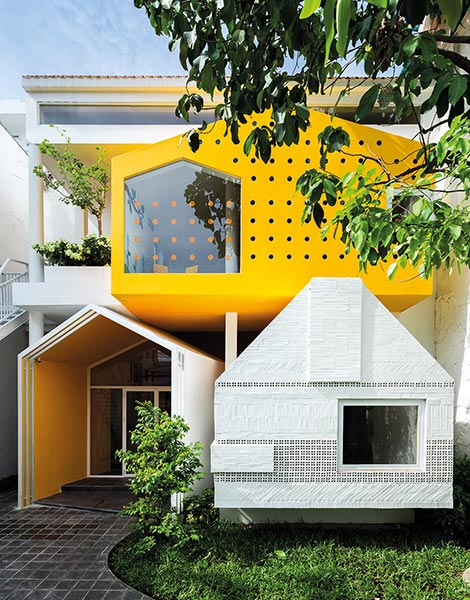 Situated within the ward in District 1 of Ho Chi Minh city, Chuon Chuon Kim kindergarten shares a street frontage with a row of monolithic townhouses and is striking at first glance – it fronts the street with a lively composition of three protruding volumes whose basic shape recalls the archetype of a house. The biggest of these volumes dons a perforated façade of bright orange, seemingly supported by a textured volume of elaborate white brickwork beneath. Oriented in a slightly different direction, a third volume with a recessed façade opens up a portal to mark the main entrance of the private kindergarten. This interplay of volumes, texture and colour is fresh and welcoming at first sight, befitting of a kindergarten and the organic streetscapes of the fast developing city.

Breaking its monolithic proportions, each of these volumes is conceived as a small-scale insert within the existing framework of the old townhouse. In fact, an extensive reconditioning has transformed the townhouse inside out, leaving only its structural skeletal untouched. Characteristically, individual volumes are juxtaposed and stacked within the constraints of existing structural elements, re-configuring the monolithic building into a cluster of small spaces inside out. 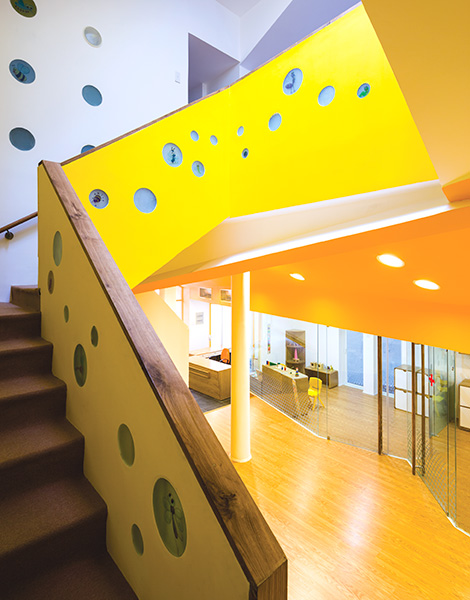 A Cluster of Small Spaces

Small spaces mirror the designers’ intrinsic understanding that children feel most comfortable in spaces relating to their size, providing them a sense of security to explore the immediate surroundings. The designers also believe that a cluster of small spaces is an ideal educational environment that will stimulate the children’s desire to venture beyond their individual bubbles.

On ground level, the main entrance volume with a predominantly orange interior extends diagonally like a central spine – it intersects and connects clusters of classrooms, a staff room and recovery room; opening up a central free space where the staircase and lavatories are conveniently located. The ‘houses’ on the facade extends their forms to the interior to create a diversity of scale and experience.

To fulfil the programmatic requirements for larger event spaces while keeping the scale of spaces consistently small, classrooms on the second storey are conceived with spatial flexibility in mind. Timbre bi-fold doors allow rooms to expand beyond their micro-worlds, effortlessly combining individual rooms and the central core (or free space) in different configurations. Classrooms with timber ceiling tucked at a corner. 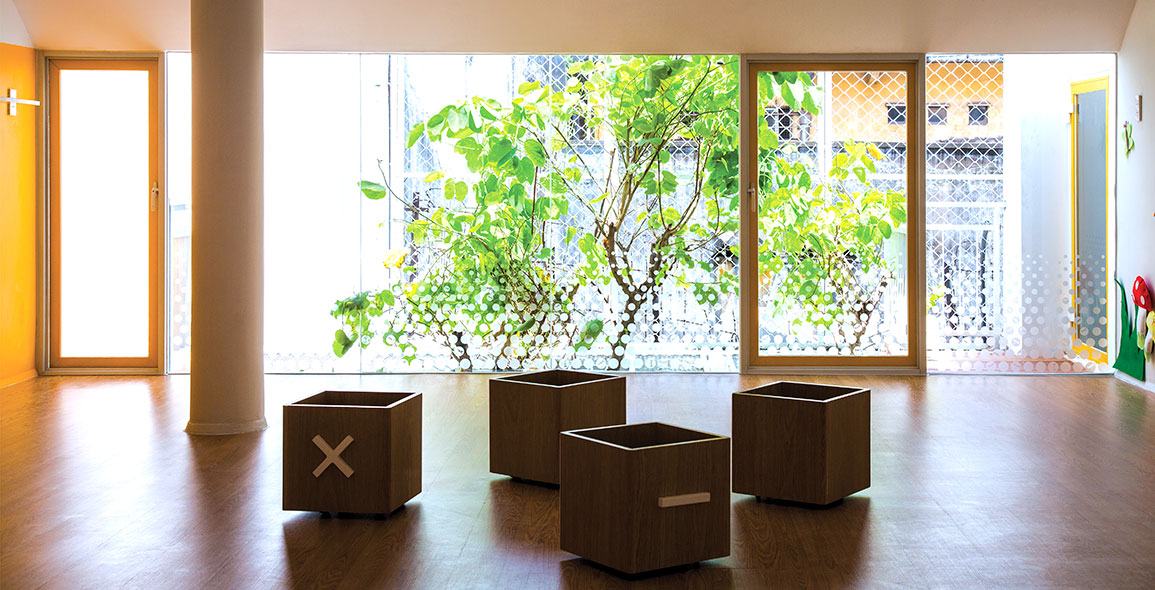 Art classrooms occupy a special space on the third storey attic. Seemingly a device for fuelling the imagination, a pair of triangular skylight frames the sky and holds the key to connecting realms beyond. Similarly, laying down to see the world through the mouth of a mythic creature reveals a different perspective of the exterior environment. This space exhibits qualities of a perfect hideout, offering yet a different spatial experience within the compact cosmos of the kindergarten.

On the exterior, a continuous flight of stairs intended for fire-escape and emergency situations connects the kindergarten to all levels. Slightly detached from the main volumes of the kindergarten, the staircase evokes a sense of play as though it belongs to the playground ensemble below. Such is the approach that has been taken for this project that took a mere five months to complete.

The constraints of structure, time and resources as well as the various requirements of the brief have been carefully managed by the designers, while staying true to their design sensibilities and dreams for the kindergarten space. Through a thoughtful and bold intervention, what once were dull spaces of an old townhouse have been completely transformed into diverse spaces of remarkable spatial qualities, delightful and well-suited to the needs and nature of the kindergarten and its users. 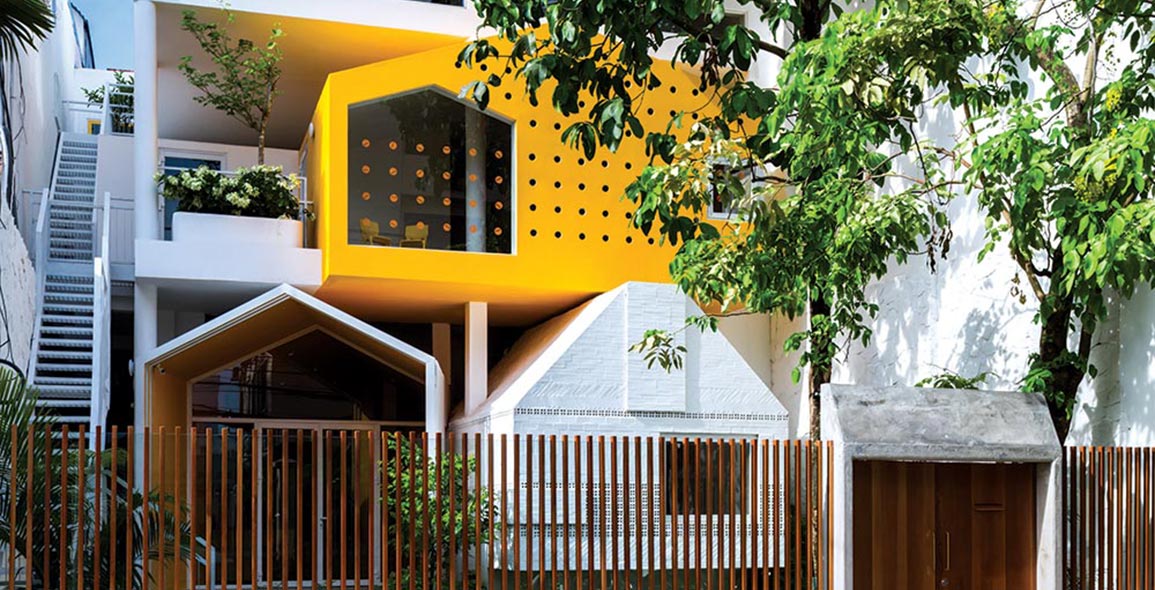