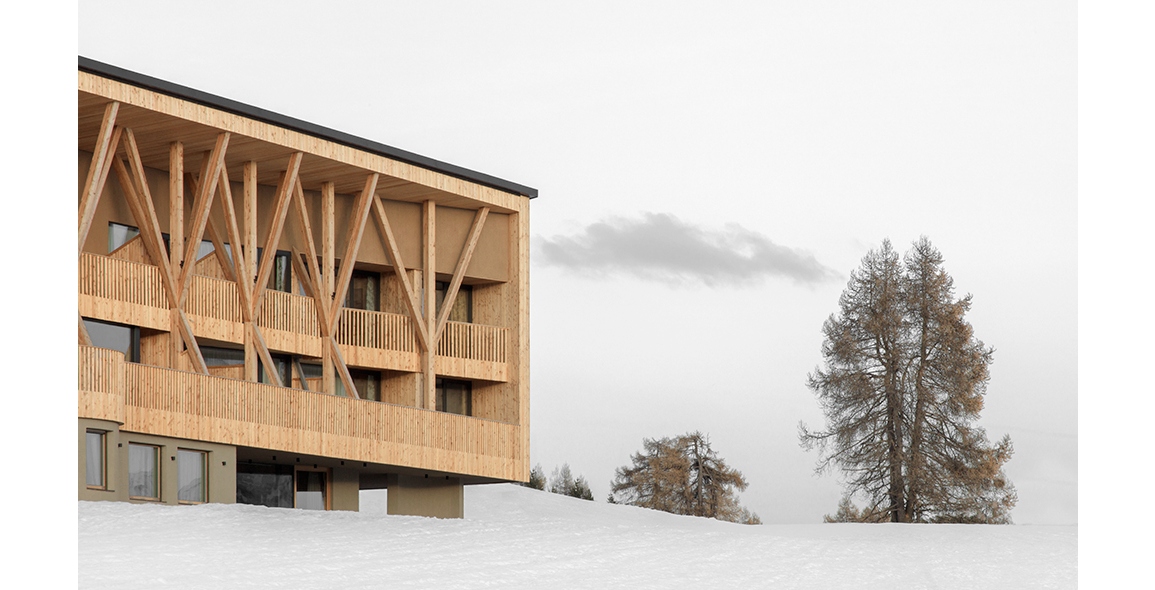 Having visited the Dolomites UNESCO World Heritage site in Italy for almost a decade, I have noticed the towns have undergone rejuvenation in the last few years.

The service staff all seem younger and the restaurants are becoming more innovative in the way they serve the well-loved cuisine of the region.

But the most telling sign is how the hotels are moving away from the traditional alpine style, to introduce contemporary features that creatively sit beside heritage elements.

Icaro Hotel is one such example, located on the Alpe di Siusi (Seiser Alm) plateau amid a web of ski slopes and hiking trails.

Originally a simple mountain lodge dating back to the 1930s, it has been overhauled by MoDus Architects to include an underground carpark extension, housing for staff, more guest rooms and a reorganisation of the common spaces.

A new wing was added to the east of the building, mirroring its western counterpart along the main axis of the original lodge.

It was subtly done, so that the resultant structure is symmetrical, seamlessly joining it to what was existing.

Immediately striking is the 13 branch-like wooden colonnades, 7.5m tall and spanning the upper two floors, that march emphatically down the 55m length of the south-facing façade.

These also double up as structural elements that hold up the large pitched roof, while acting as a frame of the view for guests residing within the hotel.

The columns are grounded on the terrace of the second floor, itself a continuous straight line joining either ends of the building to create an airy, double-height loggia.

Within the hotel, the rooms occupy the upper two floors while the ground level houses the common areas of entry, reception, shop, lounge, bar and dining hall.

Eclectic yet contemporary and delightful, the materials, textures and fixed furniture elements hint at the interior spaces of traditional alpine lodges.

Underfoot, the oak planked flooring has a braided layout that reflects the angles of the hotel’s footprint.

Tucked between the full-height, thickened wainscoting of oak panels and deep blue recesses is a range of display items that explore the folkloric nature of the local culture.

On the lowest floor is the swimming pool area, paved with Appiani mosaic gloss tiles on the floor, walls and columns that give it an almost Zen-like tranquility.

The guestrooms are accessed by the main staircase and include four new additions distributed on each of the two upper levels of the East wing.

Flanking them are Lux and Grandangolo, each large enough to accommodate up to four guests and have custom-made beds facing the floor-to-ceiling windows overlooking Alpe di Siusi.

Come summertime, the sheltered terrace on the third floor is a venue for yoga classes and also has an enclose massage area.

With its curated construct of heritage, craftsmanship and contemporary architecture and design, Icaro Hotel manages to evoke a sense of discovery and freedom that alpine landscapes evoke.

No prizes for guessing where I’ll be staying when I next visit the region. Capri By Fraser, Bukit Bintang Is A Polished Metropolitan Gem Fari Campus Is A Ground-Breaking Blueprint In Luxury Resort Development